We're late getting this one written...sorry. We didn't even go away for Christmas this year, so we don't have much excuse...but we've been busy.  In our last letter we had driven to Florida for Christmas.  In February we had a party for some friends at the yacht club where we served Peter's great award-winning chili, in edible bread bowls created by Deborah. That was so much fun that we're doing it again this year, a month earlier (the entrée this year is "butter chicken", a curry dish). 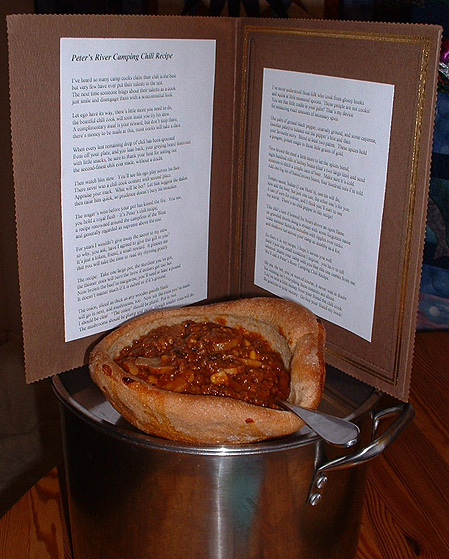 In March we flew back to Florida (because we only had a week off), grabbed a rental car at the airport and drove down to go camping on Elliot Key in Biscayne National Park, visited bird sanctuaries, and snorkelled the coral reef from a catamaran sailing out of Key Largo 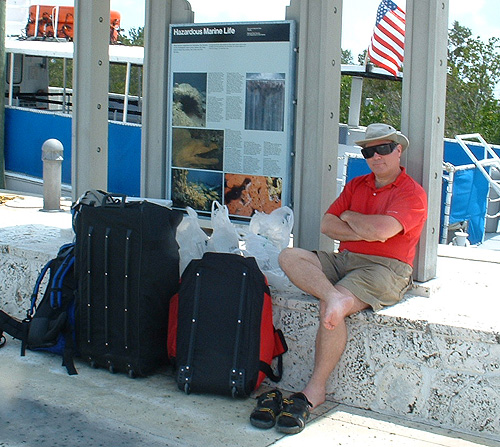 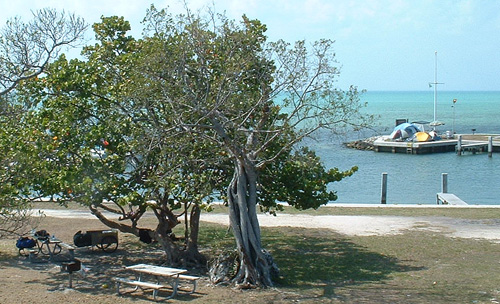 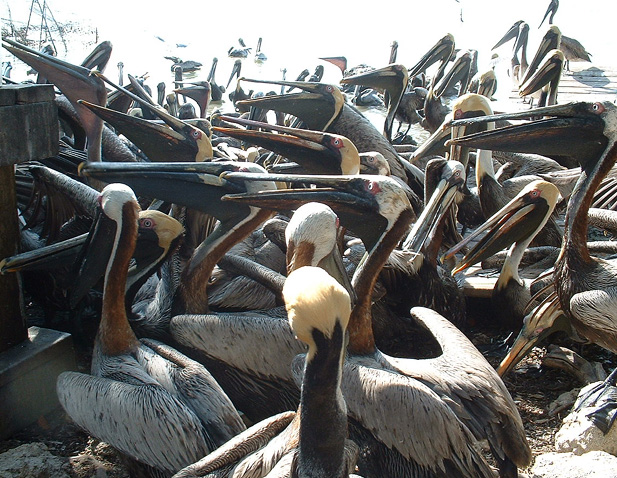 Upon our return, Deb took delivery of her new Swift - very high "cute factor".  I find it a gas to drive, no pun intended...manual transmission, zips around like a little sports car, and takes its fuel in sips instead of gulps like the old Marquis used to do.  Lots of room for Maxie and/or camping gear in the back, too.

We celebrated Canada Day with Arnd, Stefanie, Silken and Una on Salt Spring Island.  A little chilly this evening, but we had nice warm hikes and picnics on other days. 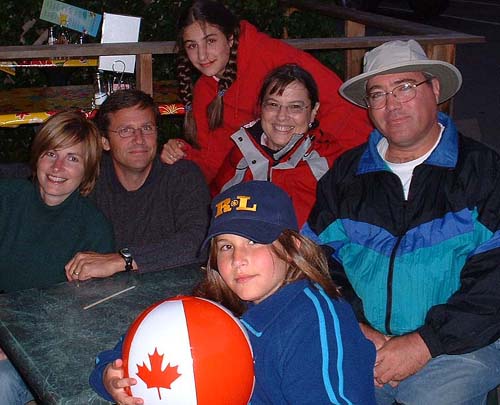 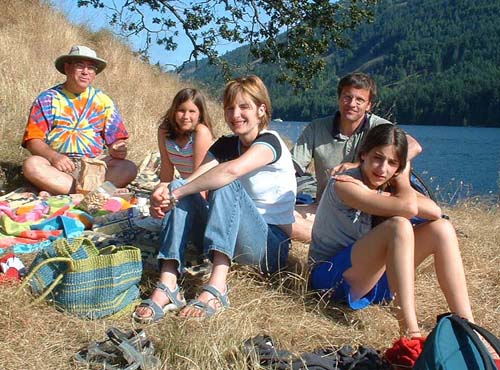 After that we stopped in Vancouver to visit with Lara, who was starring as Rosalynd in As You Like It, a Shakespearean production on Bard on the Beach. We hung out together for a few days, walking, eating Sushi, crossing the Capilano Bridge, etc... 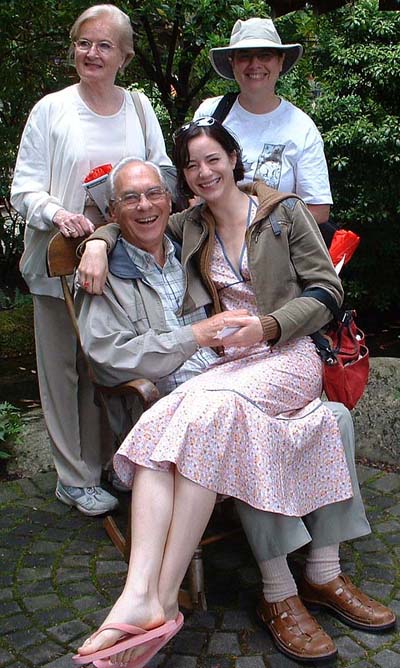 Shortly after we got home, her brother Kenton and his partner Erika visited us in Toronto. We went sailing, and sacrificed their digital camera to the gods of Lake Ontario, but undeterred, they quickly bought a better one, and we all went to Niagara Falls for a camping and sightseeing trip, as well as the AGM of the Angola Memorial Scholarship Fund. 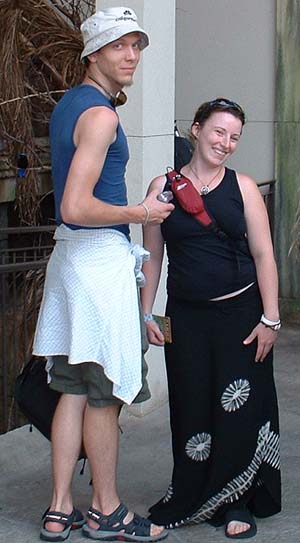 While at the Falls, we did the Maid of the Mist, Marineland, and the Aviary...Erika has birds on the brain, don't you think? 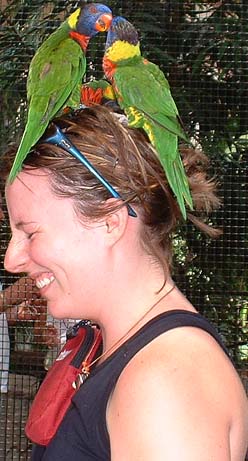 One of them tried to stow away in Deborah's backpack to break out of bird prison. Maybe he identifies with our taste in T-shirts. 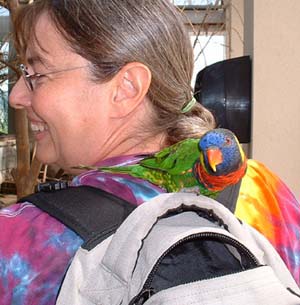 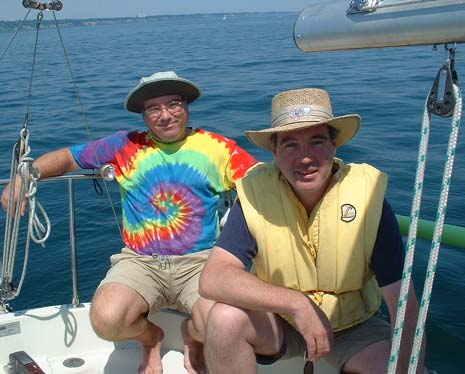 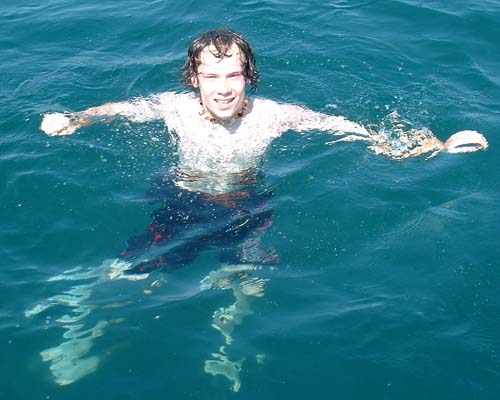 Niece Emily took a while to be convinced, 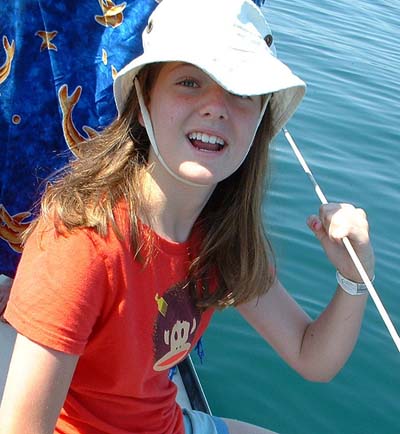 and got wet one centimetre at a time, 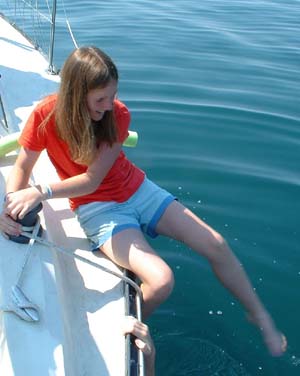 but eventually went in for a dip as well. 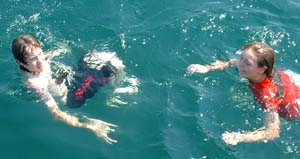 Of course, not all days on Lake Ontario are as sunny, but our friends Sean and Adrienne show us how Lake Ontario sailors deal with gray days 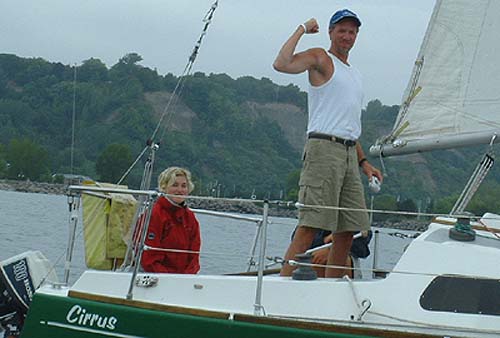 In November we sold our big 3-bedroom, 2-storey home to a close friend, and moved into the house we'd been renting out since '91.
(This photo is a year old.  It shows the old Marquis, which held up well for twenty years but is now in car heaven.) 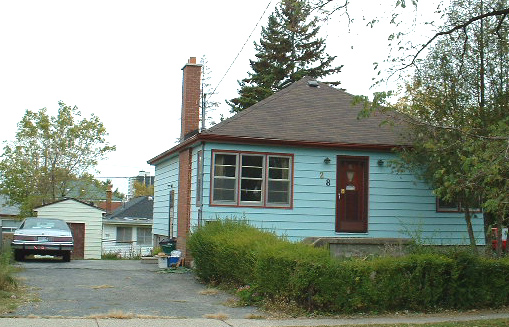 The downsizing exercise has been severe, and I'm still not sure the experiment was a total success, but it is cosy, and there's a superb garden that we'll be able to grow flowers and vegetables in when the snow melts - the last house didn't have any gardening possibilities (too much shade from mature maple trees).  We have hardwood floors, and a real wood fireplace (my new toy).  Doesn't heat the house much, but gives great ambience, and warms you up like toast if you sit right in front of it.  As the Friendly Giant used to say, "One little chair for one of you, and a bigger chair for two to curl up in, and for someone who likes to rock, a rocking chair in the middle." - and we actually have the rocking chair, too.  This room is where you'll be sitting if you come to visit us this year...and maybe sleeping, too, as my poor mother discovered a month ago! 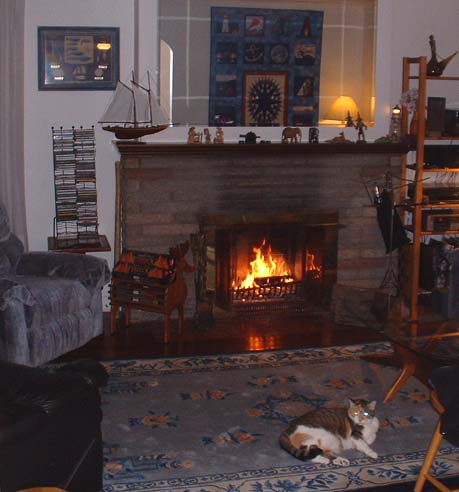 Just pulling your leg...we've come up with a better sleeping solution since Mom was here and we're a little more unpacked and a little better organized. Any of our friends will be most welcome to stop by, or even stay overnight.  We've spent this Christmas break getting organized, doing AMSF banking, helping my friend move into our old house, lots of other chores, and visiting with friends we don't see much of during the school year.

I wonder what the year to come will bring?  A new school for me in September, I know that much; but I don't know which one, yet.  Deb will stay where she is at Oakridge until she retires, three years from now according to my calculations, although she says four.  Maxie is still getting around, but growing older and weaker; we don't know how much longer she'll last, but she's almost thirteen, which is quite a feat for a Great Dane.  There will be travel, for sure - maybe China, maybe Angola; and lots of sailing.

Back to the Fun Gallery