Summer 2000 vacation letter
We spent a day in Sentosa island, taking in the underwater world, Fort Siloso, the butterfly farm and a show called Images of Singapore.  All in all, Singapore is a hot, humid, clean, modern city much like Toronto but with no debt and somewhat better architecture.  The cost of living is much like Toronto, too; cars and houses are more expensive, but food is cheaper, especially when you're eating out, which Singaporeans seem to do much more than we do.

We made a side trip to an island called Pulau Dayang, which means "pregnant woman island" because that's what it looks like from the sea.  It is on the east coast of west Malaysia.  We stayed in a rustic, primitive resort in cabins with bunkbeds and meals served buffet style on the beach, and I did six dives including a night dive; Deborah did four or five, and completed her open water certification - so she's now an official scuba diver.  The beach was lovely, with tan coloured sand as soft as icing sugar, and I really enjoyed several of my dives.

Bali is a great vacation destination.  Like Hawaii, but poorer economically and many times richer culturally.  The Hindu customs and religion run very deep.
The craft ability and artistry of the people is awesome, from painting to stone sculpture, and including papermaking, silverwork, furniture-making, and many other skills.  The people are very nice, once you get past the ones trying to peddle stuff to you at every junction, but we did meet up with a pickpocket.  We foiled him, but fell victim to a theft of cash ($250!) right out of our safety deposit box in the three star hotel we were staying in, where we'd already paid too much to stay.  I'd read a warning about that...too bad I didn't take it seriously enough.
The cost of a vacation in Bali doesn't have to be much, though.  You can eat very cheaply, and you can stay in perfectly clean two and three star hotels for $20-$25 a night, or even in smaller local hotels called "losmen" for around $7.
One can enjoy surfing on Kuta beach, where the waves are perfect for beginners and the sandy bottom is gorgeous, perfectly sloped and devoid of rocks or even sharp shells; and you can go sailing, farther up the coast.  There are many dive sites in the region; although the visibility isn't much different than the Carribean, the marine life is rich and there are many Pacific species there that you won't see on this side of the world.
Then we went on a three day side trip to Yogyakarta (pronounced and sometimes spelled "Jogjakarta"), where we saw the ancient Buddhist temple Borobudur, the ancient Hindu temple of Prambanan, the Sultan's Palace and an earlier Sultan's Water Castle, bought some batiks, and generally enjoyed ourselves. 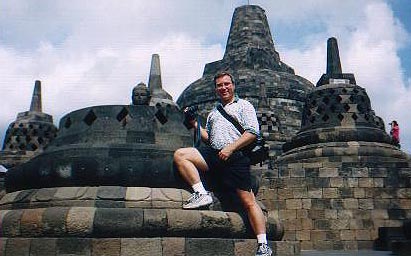 After leaving Java, we went to Chiang Mai in Northern Thailand, where we visited with Larry Shuett and his wife Jee, and daughters Angela and Lorena.  We visited the temple at Doi Suthep - lots of gold leaf - and an elephant training camp where we went for a half-hour ride in the jungle.  I actually got to sit on the elephant's head and steer her, but you'll have to see my videotape for that.  I don't have a photo of it.     We really liked the people in Thailand, including our hardworking tour guide.  We had a pretty good trip, all in all.  We flew home on August 2nd, a 25 hour trip on three planes. We actually rode on thirteen different planes in the four weeks we were away, plus a couple of overnight trains and a lot of minivans.  So it was a bit fatiguing, as well.
Upon our return, I went to Brockville right away for three more days of scuba diving.  Heavy current, exhausting, with my jet lag and all going on, but very interesting to see some of the wrecks in that area, and the water was a balmy 70 degrees from surface all the way to the bottom.  I finally completed my "advanced plus" PADI certification, which is a goal I'd begun working on somewhere around last January.
Now Deb and I are doing lots of home maintenance chores on both houses, following up on basement leaks caused by all the rain they had in Toronto through July, reshingling my garage roof, doing the windows in the other house, moving all Deb's stuff to her new school...and lots of painting and sanding and floor finishing and stuff waiting to be done after that.  In between the chores we're finding time to play tennis and go sailing, and we'll try to see a movie or two before school starts again.
We hope this letter finds everyone well.

P. S.  Click on our names to send us an email to say hello, tell us what you've done this summer, ask us anything at all about this letter or tell us what you think of it.
Click here to be taken to our home page.