William Thomas was a tough and determined man. He learned masonry from his father and turned it into his own metier, becoming an expert not only in bricks and mortar, but in the new concrete technology. He travelled all over the Maritimes and the United States - especially California - constructing railroad bridges and embankments, brick buildings, industrial chimneys and other such highly technical structures that can still be admired in towns like Stellarton, New Glasgow and many others.William "bought" a 100 acre piece of land across the road from his father's farm in 1883. It was a lovely long strip of timber stand with a beaver dam and pond; he agreed to pay the Province "$40 plus one peppercorn yearly rent". 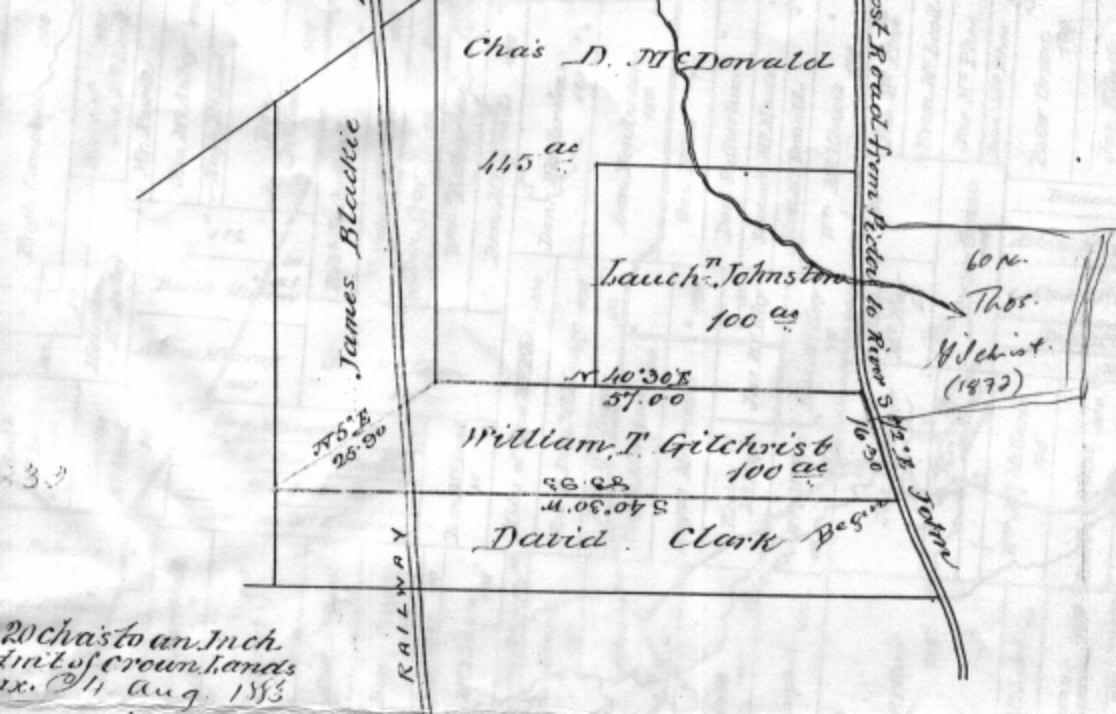 Unfortunately he sold off the bottom two acres (to the Crown?) for a railroad right-of-way in 1888 - he undoubtedly hobnobbed with friends in the railroad business because of his livelihood and the many railroad contracts he depended on. However, trains in those days were infamous for throwing off sparks (not to mention shovels full of ash and glowing coals from the bottom of the firebox), and they accidently burned down his timber stand in a giant forest fire. There was no compensation.

He was not necessarily always a likeable man, I was told. Perhaps he was a little spoiled, being the only surviving son. He opened and managed a brick plant in Meadowville just after the turn of the century, with financial partners in a company they called Canada Consolidated Clay Company Limited. He located good clay along the river, supervised the building of an appropriate molding shed and two kilns, and provided employment to local residents. The bricks were supplied by railcar to construction projects in New Glasgow. Sadly, the partners fell out, business was neglected and production decreased until the company was in financial trouble; finally in 1910 they closed the business and moved it to Pictou where it survived for a while and then went bankrupt.

William T., however, was already in Pictou, still building. He set up a kiln right on the waterfront, and made the first "hydrastone" house in Canada, as far as I know, in 1908. The earliest "official" hydrastone house in architectural history books is recorded as being built in 1910.

"Crazy Willy" died in 1916, of pneumonia contracted while loading a troop supply ship with frozen veal in Pictou Harbour. There wasn't much you could do about pneumonia in those days. His father had been a decorated soldier, so perhaps he felt that WWI was his chance to achieve patriotic glory. He tried to enlist along with three of his sons, who went overseas, so he lied about his age; but it was clear to the recruiters that he was already in his '50's, and he was refused. He had to be content with volunteering to do grunt labour loading the ships as his form of service, and thereby became a war casualty without even leaving this side of the Atlantic.

Abigail was quite a woman. She was a member of Pictou United Church and did lots of Sunday School teaching and community work. She spent a few years in Providence, Rhode Island and in California. She taught at the Poplar Hill School for many years, and William Thomas lived just up the River John Road on his father's farm; but Burnice claimed that they actually met in Providence, and that this was a common commute for people of the area - many people from Pictou worked in Providence. Abigail moved from Poplar Hill to Pictou with William in 1908.  She eventually had five children.

According to Burnice, Abigail was a renowned psychic, and would often surprise people with her "knowing". She knew that her son Donald Robert had burnt his eyes: he burnt them on a Friday and they were bandaged all weekend, but Abigail had a dream on Friday night and mailed a letter to him the following morning, postmarked on Saturday, asking what was wrong with his eyes. More on that below.

From left to right, Abigail's sons who served in WWI: "Alec" (Alexander), Tom and Don

Alexander McRae came out of WWI with a metal plate in his head and spent the balance of his life in military hospitals; once when he escaped from his sanitorium and walked toward home along the train tracks, Abigail dreamed about that and wrote to him about it.  My cousin Eve Leon, a physician who was Alex's niece, remembers, on the 100th Anniversary of Armistice in 2018, that Alex had quite a bit of shrapnel in his head at Ypres two months after his 18th birthday.  He developed quite severe epilepsy and was in hospital from 1922 to 1933 when he was referred to a neurosurgeon who removed most of the remaining shrapnel and some scar tissue. It was at that time that the silver plate was put in to cover the gap in his skull. He recovered enough to get out of hospital but continued to have some seizures. These.had nothing to do with the plate in his head. His death certificate says heart attack but his DVA doctors suspected that he died in a seizure. Given the family cardiac history it could have been either or both.

Abigail's son Thomas Gray - who my father was named after - went out west for a year to be a teacher in Regina before he signed up with the 13th Bn., Canadian Infantry (Quebec Regt.).  He hadn't liked teaching much, and was excited to be going into action. He was a young man, of course, and the nation was crazy about war as an adventure in those days.  A shell hit his trench, and he convalesced in Glasgow.  He made a trip up to Lesmahagow, where he was billetted with Gilchrist cousins who weren't clear that he was actually their blood relation until one of them, a young lady whose name escapes me at the moment, got a reply to a letter of inquiry she'd sent to his reference, who'd provided him with the letter of recommendation and introduction.
He was returned to the front as soon as he was deemed "fit", but still shell-shocked, recovering from burns and deafness, and still unwell (this was something the army did to the poor cannon-fodder infantry of WWI that they would never again do to soldiers who served in subsequent wars), only to be  wounded again, in the hip.  He was bombed by a tossed grenade, and was lost in France somewhere near Feuchy or Fampoux, outside of Arras.  Rescuers could not find him when they returned to where they'd seen him fall, and presumed that whoever had tossed the grenade had taken him prisoner.  That was on the first day of May, in 1918.  He was 23 years old.  His disappearance is briefly chronicled in the historical record of the 13th Battalion of the Royal Highlanders Regiment - use the slider to get to page 236.  There is also an entry for him in the Canadian Virtual War Memorial.  From there you can also link to his entry on page 414 of the First World War Book of Remembrance.)

Eve writes that "Tom died at "a place called the Snout near Arras"  He had gone to check some barbed wire with a sergeant. They were attacked by grenades and he was heard to say "I'm hit".the sergeant went back to  get help but they were unable to find him.  I think the report of an enquiry held in the summer of 1929 is in the book of his letters.  Abigail remained convinced for several years afterward that he was in a salt mine as a German slave or captive, and she used to dream that he visited her regularly and complained that he was always cold where they were keeping him; until one day he visited her and said that he wasn't cold any more, and she knew that he had died.

Burnice, his sister-in-law (she married his brother Don after the war) had numerous examples of this gift of Abigail's.  My uncle David writes,
"Alex was wounded in the head, and wore a metal plate in his skull the rest of his short life. He had a bicycle shop in Pictou when I was teenager".
"He was up in the military hospital in Ontario for some time, and there is a story that he walked out and they didn’t know where he was. Then his Mum (my "Nanny Gilkie”, as we called her) had a vision of him walking along the railway track towards “home”, and word got back to the authorities who did find him doing just that! He died during WWII, when I was a teenager."
"When Uncle Don was in love with Bernice, she was still in high school. Don went to visit her teacher. They were doing an experiment in the lab when something blew up and blinded Don temporarily. Later that week, Don got a letter from his mother saying: “What is the matter? You came and laid your head down on my lap, and you couldn’t see”. (At least, that’s how I heard the story). It would be interesting to hear what other versions of the story my brothers or cousins may remember."

Tom's brother Donald was an educator who served in and survived both wars, and finally died in 1962 at the age of 66.  He served in WWII with the North Nova Scotia Highlanders, and shipped out with them on the S.S. "Orion" on the 18th of July 1941 as a Lieutenant, listed as one of "The Originals".  There's a short article about him here from the Pictou-Antigonish Regional Library digital archives.  Eve writes, "Don was shot in the thigh at the Sommes in August of 1916. (Tom was wounded a few weeks later).  Both were sent back to England. Both volunteered to go back but only Tom was sent. "

Abigail's youngest son William Sidney doesn't appear in the picture of his older brothers in uniform (above) because he was too young to serve in WW I.  He wanted to lie about his age, but Tom wrote to Abigail to convince her not to allow him to enlist - he'd seen the reality of war by then, and hoped to spare his youngest brother.  My siblings and cousins, and our parents, owe a debt of gratitude to him for that, since there's a good chance none of us would be here if he'd been allowed to enlist.  However, "Sid" had distinguished military service of his own in WW II, as a front line doctor in Italy.

Abigail's eldest child was Christina, who married Howard V. Powell and lived in Pictou. They were Eve's parents.